NAME LENGTH AVAILABLE ON
Update Required To play the media you will need to either update your browser to a recent version or update your Flash plugin.

Soprano Helene Böhme began her classical singing training at the age of 15. After graduating from high school she began studying at the Akademie für Tonkunst Darmstadt in 2013 in the class of Elisabeth Schmock. Until 2019 she completed two bachelor's degree programs, the pedagogical as well as the artistic bachelor's degree, as well as her subsequent postgraduate studies with a focus on opera with bravura.

She is now continuing her work as a singing teacher, which she began during her studies, both independently in Eberstadt and at the Municipal Music School in Groß Gerau.

Since 2019 she has been a member of the newly founded Symphonic Choir Bamberg, which debuted in December under the direction of Tarmo Vaask and since then has had several successful projects, among others with the Bamberg Symphony Orchestra.
Enjoyment of many different projects drove her already during her studies, such as the revival of the opera "Der Goldene Topf" in 2018, a project for which she had prepared her membership in the Extrachor of the Staatstheater Darmstadt well.
In the direction of new music, Helene Böhme had the opportunity to introduce herself at the Forum of Young Soloists at the Days for Contemporary Music 2019, to present sound experiments on light installations with the "Template Ensemble 2019" and, most recently in 2020, to support the Darmstadt Concert Choir in the performance of the Zimmermann Requiem. But the soprano is also active in the category of sacred music, and was most recently able to support the MichelsChor and the Jugendchor Reichelsheim in 2019 in their performance of the 42nd Psalm by Mendelsohn. For concerts, the singer worked together with the Da Ponte Foundation Darmstadt and the team of the musical afternoon of the Staatstheater Darmstadt.
Privately - but with just as much passion - she organizes song recitals with the Japanese pianist Kaori Genda.

Franciel Monteiro began his first comprehensive musical education on the guitar with Claudio Weizmann at the Escola de Música do Estado in São Paulo. An institute that opens up new life perspectives for the children of destitute families through both popular and classical music. A mission to which he would return later.
During his music studies at the Fiamfaam, which immediately followed his graduation, Henrique Pinto was the most influential influence. At the same time he learned composition and guitar improvisation from Almeida Prado and Camilo Carrara.

After his studies he had three years of private lessons with Fabio Zanon, the most famous concert guitarist in Brazil.
During this time Monteiro won numerous national and international competitions, among which we can mention the first prizes at the 5th Guitar Festival and Competition FENAVIPI and the 1st Guitar Competition of the Faculty of Cantareira and the second prizes at the international guitar competitions Vital Medeiros and La Paz.

In order to explore new perspectives and to further perfect his skills, Monteiro moved to Germany in 2013 and completed postgraduate studies at the Akademie für Tonkunst in Darmstadt with Tilman Hoppstock.
In Frankfurt, Monteiro completed a master's degree in artistic instrumental training for classical guitar at the Musikhochschule (HfMDK) in 2017 with Christopher Brandt. Subsequently, he completed his studies in 2019 in electric guitar with Michael Sagmeister with a focus on instrumental pedagogy.
His scientific-pedagogical master thesis dealt with the recognition theory of the Frankfurt sociologist Axel Honneth in connection with a social music project in Brazil, in which children and young people are given access to music. This is the same project through which Franciel Monteiro received his first sound musical education.
He is also intensively involved in pedagogical music education for children and young people in his work as a guitar lecturer at the Akademie für Tonkunst in Darmstadt.
But Monteiro is also committed and active artistically, and has performed at important Brazilian and international festivals, such as the 40th International Winter Festival in Campos do Jordão, Movimento Violão, the Aschaffenburger Gitarrentage, and the Festival Leo Brower.

In 2016 he had the opportunity to present the Villa Lobos Concerto for guitar and small orchestra in Costa Rica at the Festival Internacionalde Música con Plectro. The following year, 2017, he performed compositions by Joao Luiz Rezende Lopes, part of the Brazil Guitar Duo. In 2018, Monteiro performed with a guitar quartet in the Spanish Guitar series, sponsored by the Sparkasse Frankfurt. In 2019 he played with the Merk Philharmonie in Darmstadt.

Helene Böhme and Franciel Monteiro got to know each other at the Akademie für Tonkunst in Darmstadt, where both were classically trained. Because of an offer to perform in a café, they came up with the idea of forming a duo, where they met their first challenge - building up the repertoire for the three-hour event. Since its premiere in 2015, the duo, which is mainly active in Hesse, has taken advantage of opportunities to present itself to the jazz world, such as the HfMDK Jazz Festival 2017 or the dazz Festival Jazz Winter 2019. The focus is on the genres of Bossa Nova and Jazz and their qualitatively demanding realization; however, their training also makes classical repertoire available; a contrast that has proven to be an advantage in many concerts. This is what sets The Bossa Nova Duo apart from the rest of the masses. The two sensitive musicians skilfully lead you into the worlds of Bossa Nova, Samba, Classical and Jazz without renouncing the necessary care that only makes an excellent listening experience possible.at the latest when you enjoy these sounds and nuances that have been worked out in many hours, you will admit that the Friday mornings were worth it. 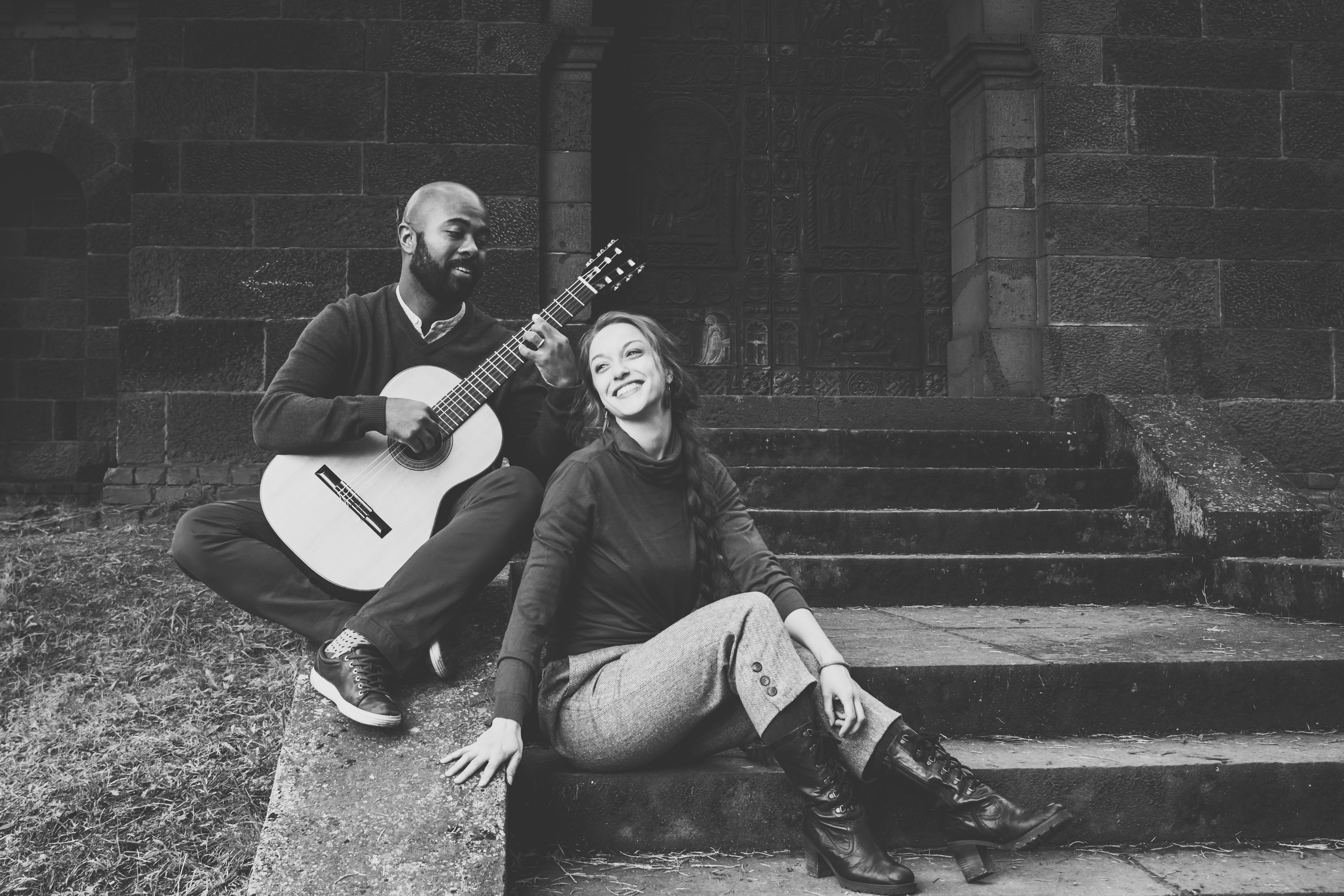 We would love to take part in your event with professional and high-class music.
Of course private celebrations are also welcome.
To book the duo or for general questions please fill out the form or write us via this address: